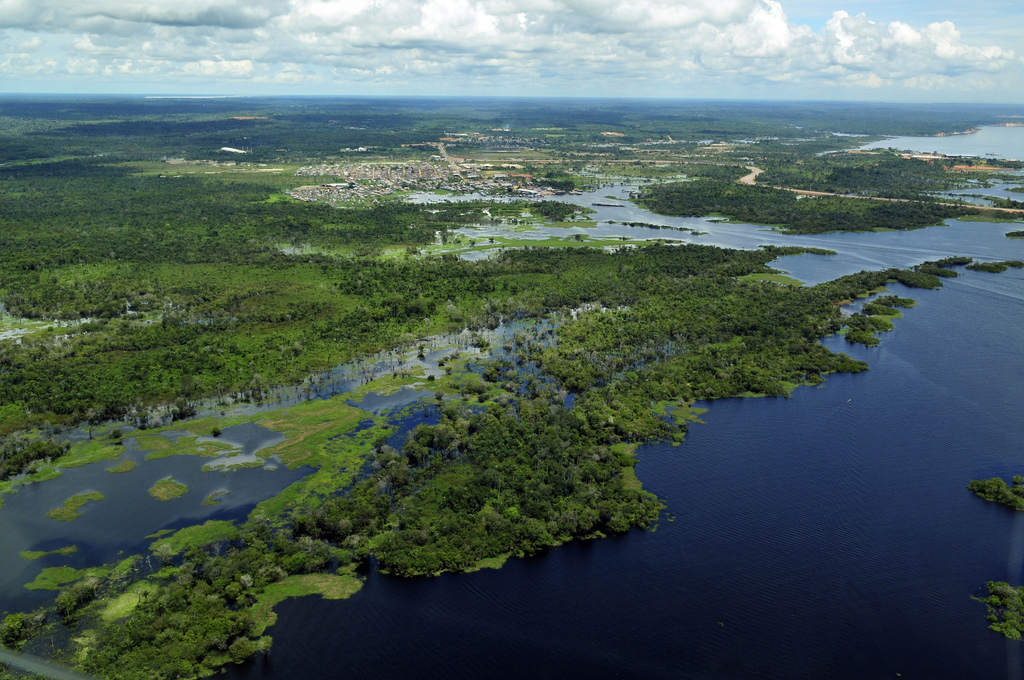 TERRA-I ANALYSIS   |   Ecuador is recognized as one of the biodiverse hotspots on earth, underneath the Amazon rainforest lies the country’s oil reservoir. With the oil companies and cleared routes come settlers, therefore more and more of this diverse rainforest is being cut down. Since the oil concerns entered the Ecuadorian Amazon 45 years ago, they keep exploring and exploiting the area. The Terra-i detections reveal a total habitat loss of 87,525 Ha, 16,943 Ha (19%) is part of protected areas, between January 2004 and February 2015. 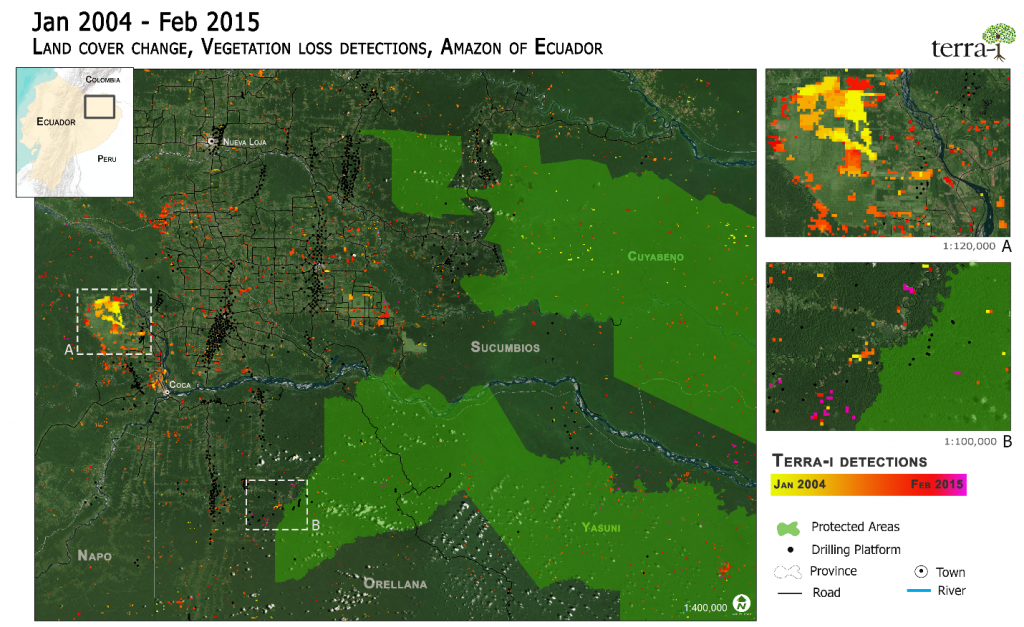 Map of forest cover loss detections by the Terra-i system from January 2004 to February 2015. The main hotspots of deforestation are located near the city Coca and in proximity to oil drilling platforms, presented in the white rectangles.

Oil vs Biodiversity in Ecuador

After extensive banana exportation the main economic gain of Ecuador shifted towards oil in the 1970s. While the oil prices are fluctuating, the demand for black gold remains high. The exploration and detection beneath the Amazonas of new oil fields leads to the exploitation of the resource and natural and cultural variety can be put in danger. The biodiversity is enormous, there are 2500 registered tree and shrub species, but the estimation goes up to 3100. Although there are protected areas, the government does not restrict the oil companies entering these areas (GREENBERG et al., 2005). Oil companies construct access roads and drilling platforms to exploit the region for almost 50 years now. Attracted by these cleared routes people settle nearby, cut and burn more forest for agriculture or domestic animals (BUTLER, 2012). An example would be an oil pipeline which is 420 km long, traversing the Amazon and the Andean mountain range clearing forest in each habitat (YASUNI GREEN GOLD 2008). Another example of destruction is a 150 km long road right through the Yasuní National Park, which was built in the mid-1990s (GREENBERG et al., 2005). By means of those examples, it has been proven that the construction of roads and subsequent settlers has the biggest impact on the exploitation of the Amazon rainforest and its related deforestation.

93.9 % of the Ecuadorian Amazon is covered with forest, almost 11 million hectares (Ha), from which 2.7 million Ha (24.5%) are part of Protected Areas. Furthermore the region is considered as one of the most biodiverse places on earth (BUTLER, 2012). The consequences of the exploration and exploitation for oil can be observed in the natural vegetation loss. The Terra-i system detected a total forest cover loss of 87 525 Ha in the last ten years, 8,142 Ha (approximately 8,000 football fields) per year. Oil companies built several drilling platforms in the northern provinces of the Ecuadorian Amazon that now see the highest deforestation rate. Therefore Orellana has the highest habitat loss with an accumulated deforestation of 25,606 Ha in the past decade, followed by Pastaza (28,368 Ha), Sucumbíos (16,187 Ha) and Napo (3,893 Ha). This is equivalent to a deforestation rate of 0.96% of the total forested area in these four departments. This is 2.28 times higher than in the remaining forested areas of the ecuatorian Amazon where the rate of change was of 0.42%. 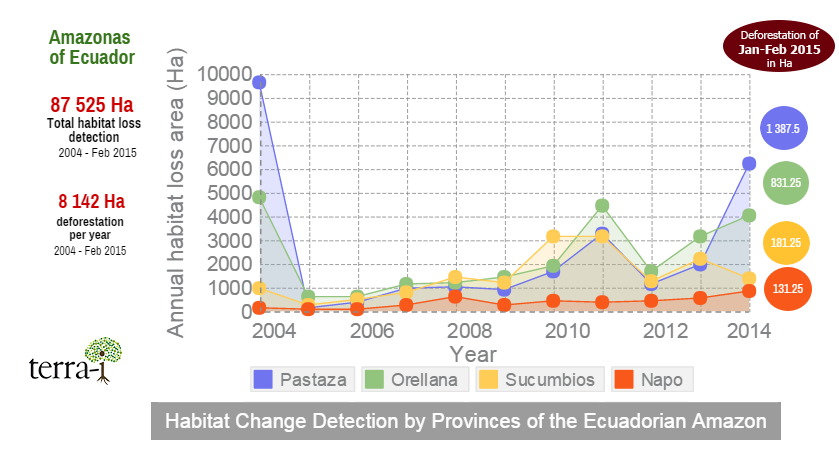 Infographic showing the natural vegetation loss in the provinces of the Ecuadorian Amazon based on the Terra-i system in the period of January 2004 to February 2015.

The deforestation in the Amazon forests of Ecuador happens on a small scale. The best way to visualize the most affected areas a density analysis is used. The concentration of deforestation is calculated as the percentage of forest loss per 100 Ha. The results show clearly a trend of vegetation loss in the proximity of drilling platforms, especially near the city Coca. Furthermore the map reveals a deforestation of 19% (16,943 Ha) of the Protected Areas. Several access roads to the platforms were built, which are followed by colonization, deforestation and illegal logging (BASS et al., 2010). 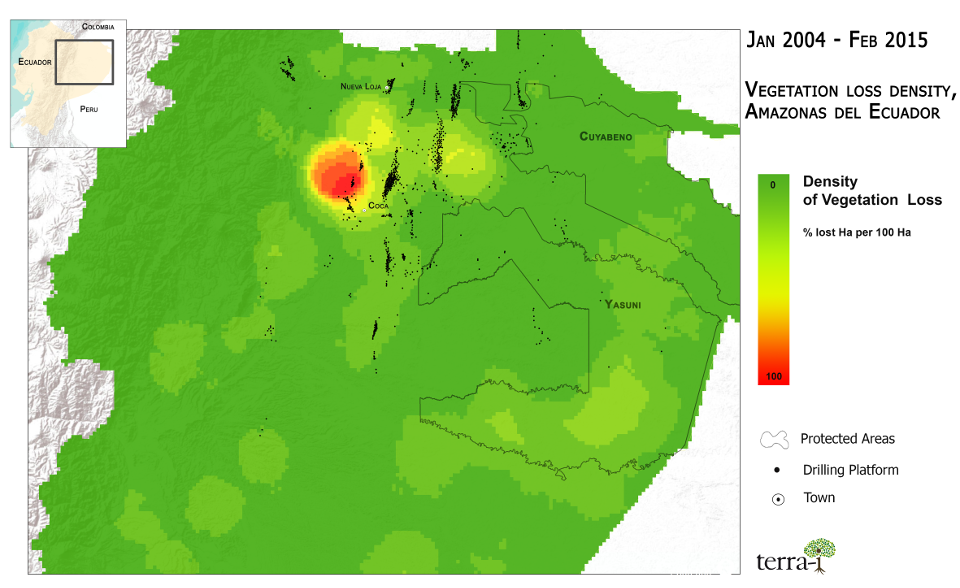 Density Analysis of natural vegetation loss in the Amazonas of Ecuador, based on the Terra-i system, in the period from January 2004 to February 2015.

Reduce the impact of oil drilling in the Ecuadorian Amazonas

As mentioned above the construction of access roads and the following settlers with their activities are the main drivers of deforestation in conjunction with oil drilling. FINER et al. (2015) propose among others the method of extended reach drilling (Figure 4). Instead of several platforms drilling vertical, one platform can drill almost horizontal and with various pipes. Therefore larger areas can be reached and the impact on the vegetation cover is reduced.

Extended reach drilling to reduce the impact on the vegetation cover.

This article originally appeared on Terra-i.org BANNER PHOTO: Aerial view of the Amazon Rainforest, near Manaus, the capital of the Brazilian state of Amazonas. CIAT (Flickr).