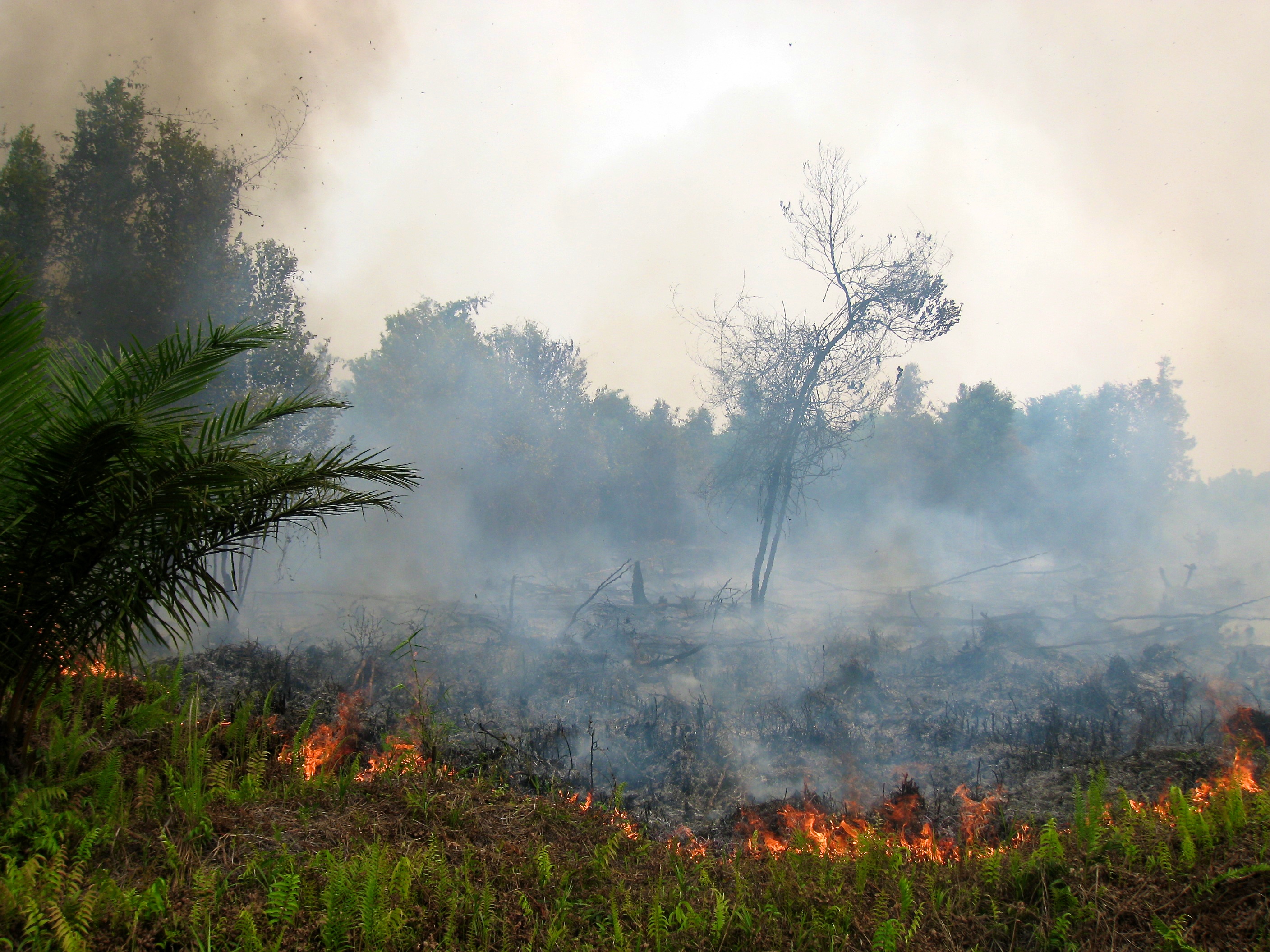 Fires are flaring up once more on the Indonesian island of Sumatra. Media reports in the region indicate that the resulting smog has already reached unhealthy levels over parts of Indonesia and Malaysia. New fire alert data from NASA, analyzed by WRI as part of an ongoing series on the fires and haze, show a total of 198 high-confidence fire alerts during the period of July 20-22, almost half of which were inside of logging, palm oil, and pulpwood concessions. The number of fire alerts shows a dramatic upward spike from the previous weeks. This is especially alarming, given the recent commitments from companies and regional governments to address the causes of the fires, as well as the announcement of a high-level agreement on fire monitoring by ministers of five Southeast Asian countries last week. Above all, the new data indicate that Indonesia’s fire and haze crisis continues and remains a serious issue. Decisive action is needed from governments and companies to address the underlying causes of the fires and respond quickly when new fires are detected. Figure 1 shows the distribution of fire alerts over the period of July 20-22. The fire alerts are concentrated in the north of Riau Province on the Indonesian island of Sumatra. 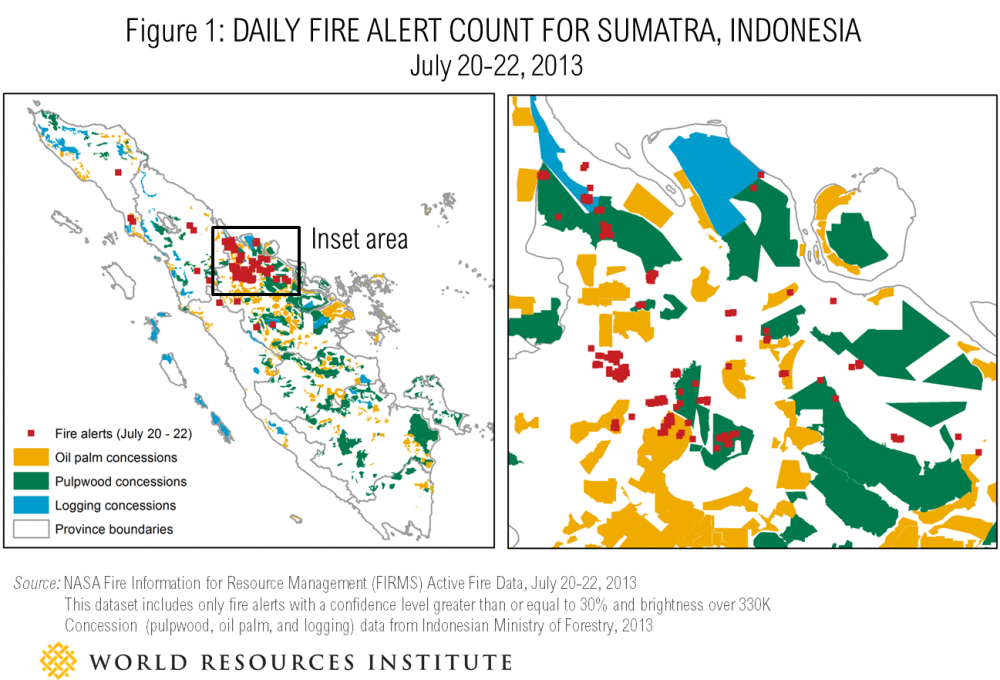 Figure 2 indicates the distribution of these fire alerts between different types of land use. Almost half of the fire alerts occur in logging, palm oil, and pulpwood concessions. A list of the effected concessions and companies is available at the end of this document. 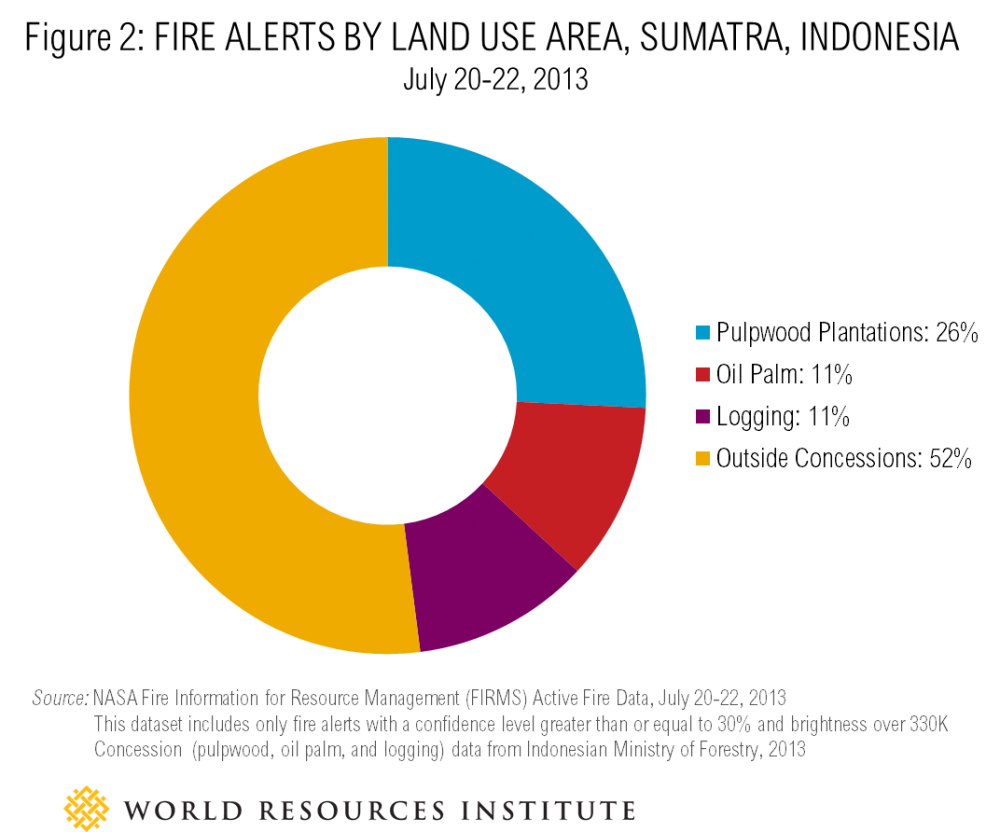 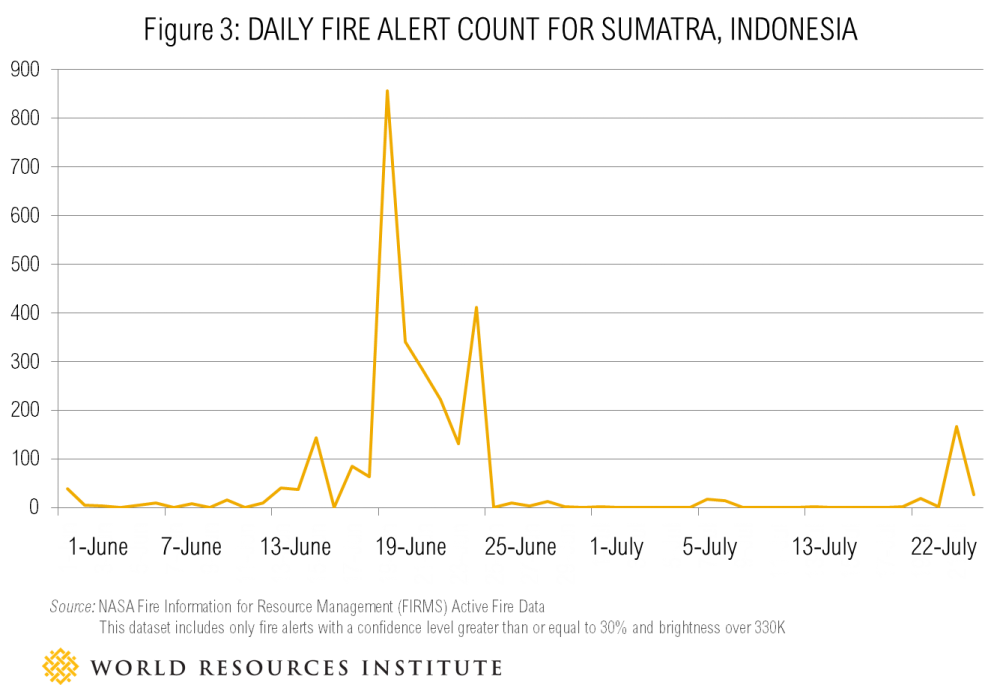 How to Reduce the Risk of Fires and Haze

The spike in fire alerts in Sumatra shows that the fires and haze crisis is far from over, as WRI stressed last week. Governments across the region can mobilize resources to help identify the locations of the fires, contribute to firefighting efforts, and investigate the exact causes of the fires. Companies can do the same, and ensure that any fires on their concessions are quickly extinguished. In the long term, better monitoring, enhanced enforcement, more transparent data, and improved governance could help reduce the risk of further fires and haze. At the recent meeting of Southeast Asian governments on the haze in Kuala Lumpur, governments in the region committed to share concession maps between themselves, but elected not to make the maps available to the public. WRI recently put out a statement noting that this was a disappointing decision, and called on governments in the region to publicly disclose company concession boundaries. This transparency would improve coordination between governments and local agencies, empower companies to more rapidly identify and extinguish fires in and around their concessions, allow better contract compliance between commodity producers and their customers, and bolster independent monitoring and research by civil society. By addressing these fundamental needs and opening data archives, Indonesia and the region have a better chance at a less hazy future. 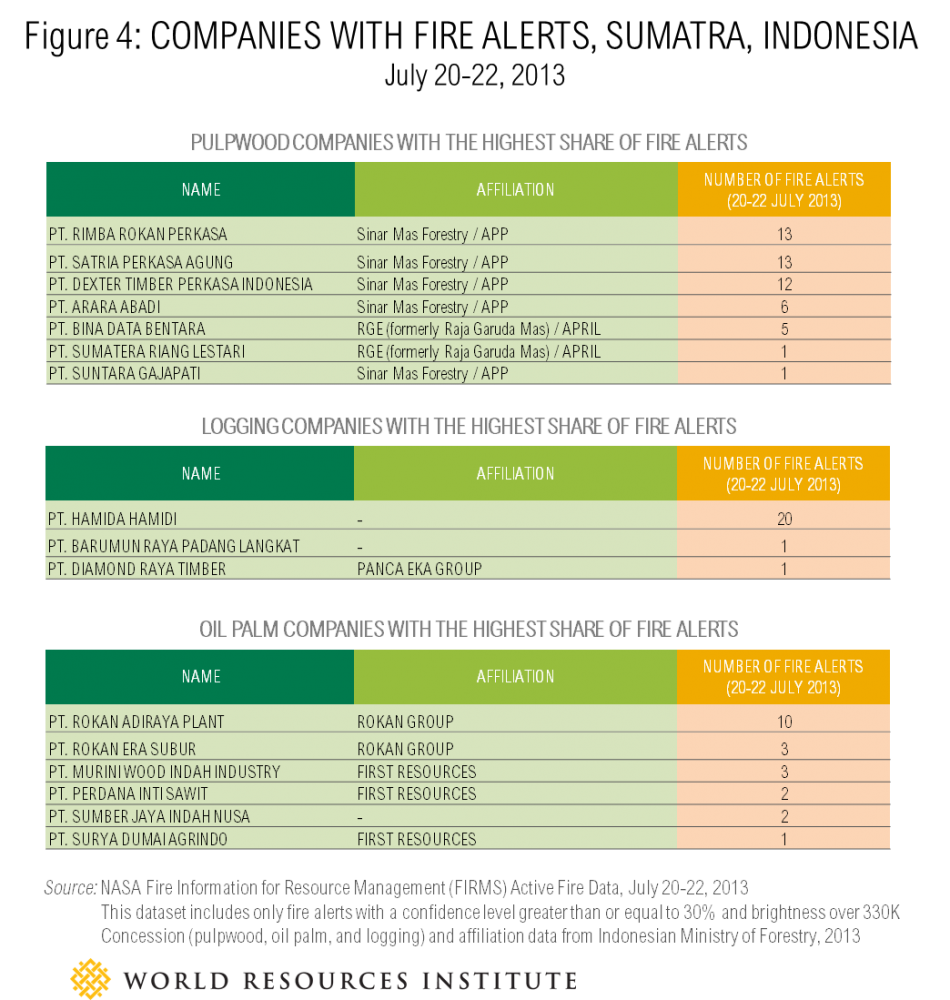 LEARN MORE: For more WRI analysis on Indonesia’s forest fires, check out our blog series. Since each satellite passes over the equator twice a day, these alerts can be provided in near-real time. Fire alerts are posted on the NASA FIRMS website within 3 hours of detection by the satellite. The accuracy of fire detection has improved greatly since fire detection systems were first developed for the MODIS satellites. Today, the rate of false positives is 1/10 to 1/1000 what it was under earlier systems first developed in the early 2000s. The algorithm used to detect fires includes steps to eliminate sources of false positives from sun glint, water glint, hot desert environments and others. When the system does not have enough information to detect a fire conclusively, the fire alert is discarded. In general, night observations have higher accuracy than daytime observations. Desert ecosystems have the highest rate of false positives. Many papers have been published to validate the NASA MODIS active fire alerts for use in various applications. WRI is employing a recommendation for detecting forest clearing fires (described in Morton and Defries, 2008), identifying fires with a Brightness value over 330 Kelvin and a Confidence value > 30% to indicate fires that have a high confidence for being forest-clearing fires. Low confidence fires are lower intensity fires that could either be from non-forest-clearing fire activity (clearing fields or grass burning), or could be older fires that have decreased in intensity (smoldering rather than flaming fires). The use of this classification establishes a higher standard for fire detection than using all fire alerts equally.

Sources: NASA FIRMS FAQMorton, D., R. DeFries, J. T. Randerson, L. Giglio, W. Schroeder, and G. van der Werf. 2008. Agricultural intensification increases deforestation fire activity in Amazonia. Global Change Biology 14:2262-2276.We used NASA’s Active Fire Data to determine the likely location of fires on the ground. This system uses the NASA MODIS satellites, that survey the entire earth every 1-2 days. The sensors on these satellites detect the heat signatures of fires within the infrared spectral band. When the satellite imagery is processed, an algorithm searches for fire-like signatures. When a fire is detected, the system indicates the 1 km2 where the fire occurred with an “alert.” The system will nearly always detect fires of 1,000 m2 in size, but under ideal conditions, can detect flaming fires as small as 50m2. This post originally appeared on Insights. Cecelia Song, Kemen Austin, Andrew Leach, and other experts at WRI also contributed to this post.