Blog home/Data and Research/We Know How Forests Changed this Month, Thanks to New Satellite Alerts
Search the GFW Blog 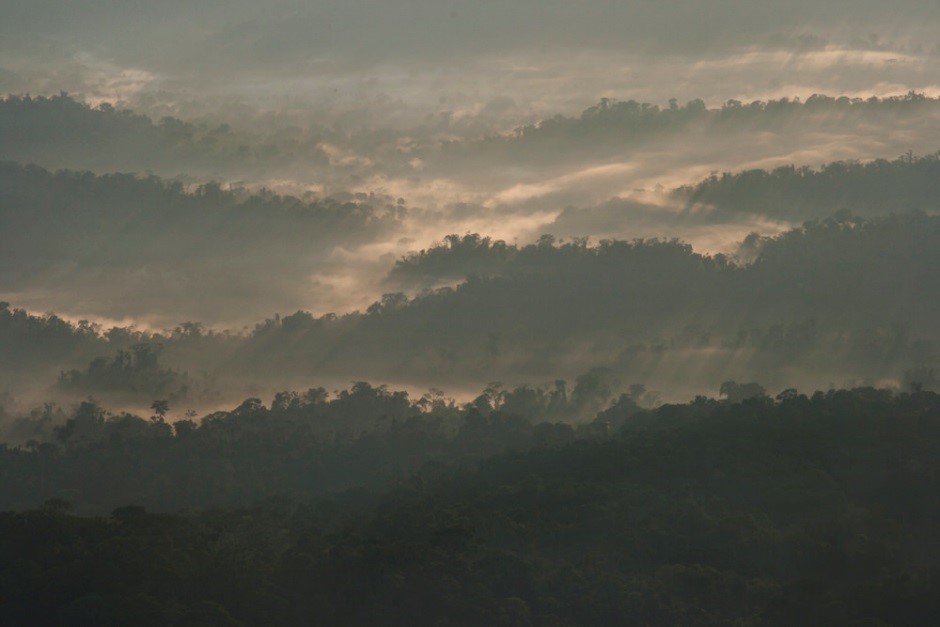 We Know How Forests Changed this Month, Thanks to New Satellite Alerts

It’s a warm August day in the pristine forest of Cordillera Azul National Park, located in Central Peru’s Amazon Rainforest. Cordillera Azul, home to more than 1,800 species of plants and animals, is one of the most biologically diverse areas in the world—and one of the most endangered. On this day, new patches of forest-clearing pop up on the east side of the park’s surrounding buffer zone—some legal, some not—and for the next six months, they proliferate day after day, creeping toward the borders of the park. We’re able to track this activity thanks to a new satellite-based forest monitoring tool, which tells us where trees are lost in as little as one week—depending on cloud-coverage—after it happens. Developed by the University of Maryland and Google, the new GLAD (Global Land Analysis and Discovery) alert system now available on Global Forest Watch detects tree cover loss in Peru, Republic of Congo and Indonesian Borneo at 30-meter resolution, roughly the size of two basketball courts. Previously, governments, forest managers and communities had to wait an entire year to get detailed satellite data on tree cover loss, presenting challenges for law enforcement and anti-deforestation efforts. 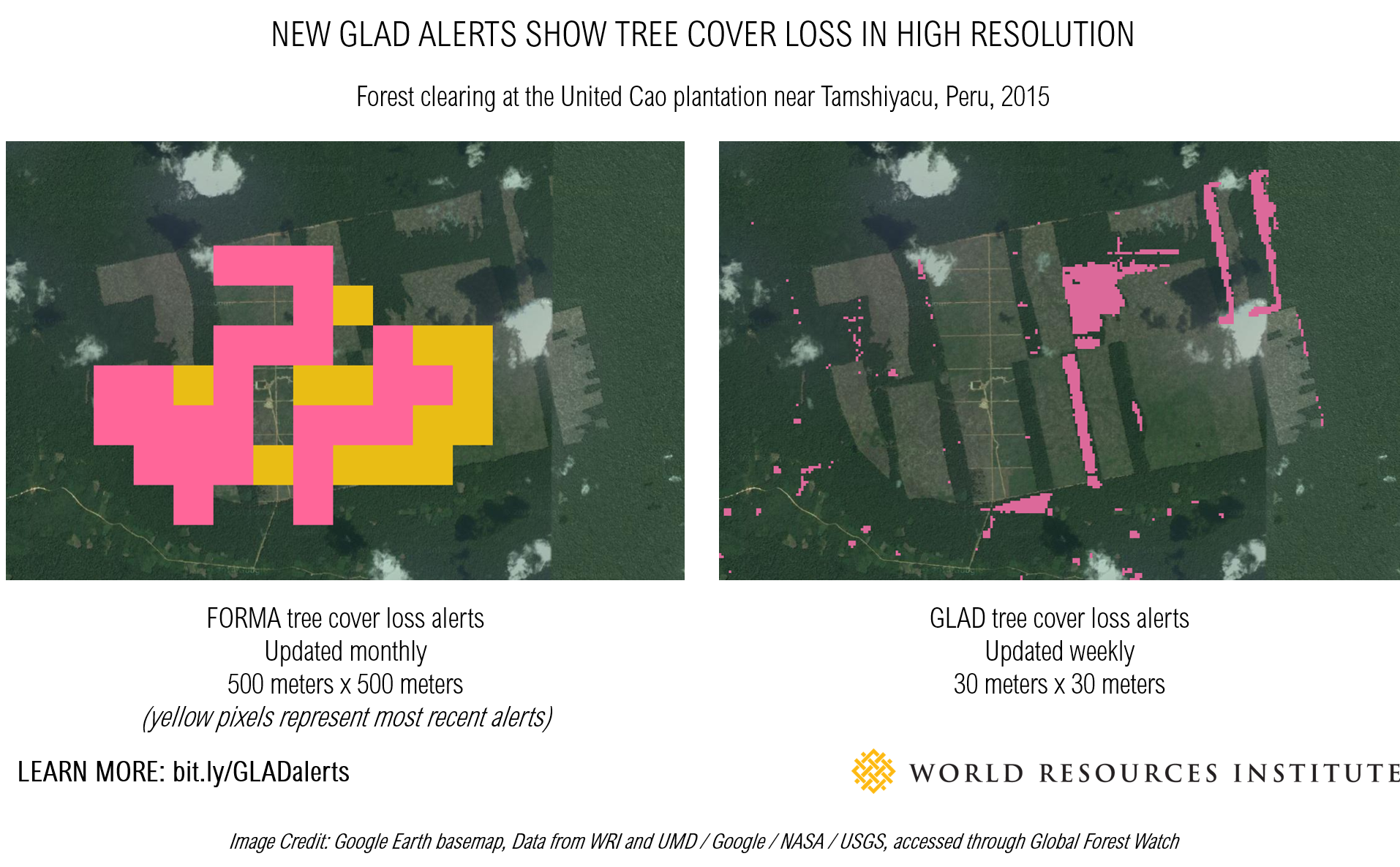 A CLOSER LOOK AT GLAD TREE COVER LOSS ALERTS With data from satellites, there is generally a trade-off between resolution and the frequency of updates – that’s why most of the alerts already on Global Forest Watch are 500- or 250-meter resolution. The GLAD alerts are breaking this convention to give us the best of both worlds: the alerts are higher resolution and more frequently updated than other alerts. They are fine enough to detect loss from activities like logging, illegal mining, and small-holder agriculture, all major drivers of deforestation that were previously too small-scale to be picked by alert systems on Global Forest Watch. The alerts are also the closest to real time we have available: New alerts are triggered with every new, cloud-free Landsat image (as often as every eight days for any particular location) and are updated weekly on the website. To learn more about the alerts: read the full methodology paper in Environmental Research Letters. WHAT IS AN ALERT? The pink pixels you see in the GLAD alerts are different than the pink you see in the GLAD Annual Tree Cover Loss data on Global Forest Watch. Alerts serve as an early warning system indicating areas that have likely experienced recent loss. The annual data provides a more definitive estimate of the amount of tree cover loss that has occurred within a year. Thus, the annual data is well suited to analyzing trends over time and the GLAD alerts can help support on-the-ground monitoring and enforcement efforts.

Here’s a look at what the new system shows us about what’s happened recently in the forests of Peru, Indonesia and Republic of Congo:

Illegal logging has become a major issue in Peru, with estimates that more than 80 percent of timber in the country is illegally harvested. Selective logging is difficult to pick up directly at 30-meter resolution, but the roads used to transport the harvested timber out of the forest are large enough to be detected by the GLAD alerts. In the buffer zone around Cordillera Azul National Park, three logging roads can be seen expanding over the past six months, with a new fork popping up last month. Now that it’s rainy season in the Peruvian Amazon, the alerts seem to have stopped as of this month—for now. Though whether that’s due to lack of visibility or cease in activity remains to be seen. The GLAD alerts could help environmental organizations in Peru better monitor and take action to stop illegal logging. The Monitoring of the Andean Amazon Project (MAAP), a collaboration between the Amazon Conservation Association (ACA) and their Peruvian sister organization Conservacion Amazonica (ACCA), have already released a report based on the GLAD alerts highlighting recent deforestation hotspots in the Huánuco, Madre de Dios and Ucayali regions. As new alerts become available, the ACA will monitor these hotspots in greater detail to determine the drivers of deforestation.

Click here to view animation or view on the interactive map.

Oil palm expansion is a well-known driver for much of the forest loss in Indonesia, and especially in Kalimantan (Indonesian Borneo), which holds roughly one-third of the country’s oil palm plantations. In the image below, GLAD alerts clearly show large, industrial oil palm plantations on the western coast of Kalimantan expanding into the surrounding primary forest. Since the beginning of 2015, there have been more than 58,000 alerts just within the circled area.

Click to view animation or view on the interactive map.

The GLAD alerts represent an enormous opportunity for improved monitoring of agricultural expansion in forested areas in Kalimantan, particularly for companies interested in achieving deforestation-free supply chains. Olam, one of the largest trader of agricultural commodities in the world, are already exploring how the GLAD alerts can be used to monitor the forest impacts of tree crops like oil palm and cocoa within industrial and smallholder operations from Indonesia to the Republic of the Congo.

The Republic of Congo has a low deforestation rate due to its lack of development. However, that’s expected to change considering the country’s historically weak governance, growing economy, and new infrastructure opening access to previously remote areas. Roads are particularly important indicators of small-scale deforestation in the Congo Basin, but difficult to map in a timely manner using available satellite-based systems. There have been fruitful efforts to monitor their spread using crowdsourced data, but these can be labor and time intensive. The new GLAD alerts provide complementary data that picks up the expansion of vast logging road networks where human-analysis leaves off. In the map below, crowdsourced data from LoggingRoads.org trace the expansion of a logging road up to 2014. The GLAD alerts shows the same road expanding and branching off throughout 2015 and into 2016.

Elsewhere in the Republic of Congo, nearly 85,000 GLAD alerts triggered over a massive clearing on February 19, 2016. Although the clearing happened inside a logging concession, the scale and pattern suggest it might be due to a different activity. Clearing of huge swaths of forest, like the one below, are typically indicative of industrial agriculture.

Alerts Straight to Your Inbox

The GLAD alerts could revolutionize the way we monitor forests, beginning in Peru, Republic of Congo, and Kalimantan, and soon expanding to the rest of the world. But these alerts will not inspire action on the ground by themselves—we need people like you to use them. With the GFW subscription, you can get an email notification every time there is a new alert in your area of interest—whether that area is a national park, an entire country or a logging concession. The automated emails will tell you the number of new alerts in that area and a direct link to see them on the map. By keeping an eye on the world’s forests, everyone can help play a role in their protection. LEARN MORE: Explore the data here, learn how to subscribe for alerts here, sign up for our webinar on how to use the alerts here.