/9 Maps that Explain the World’s Forests 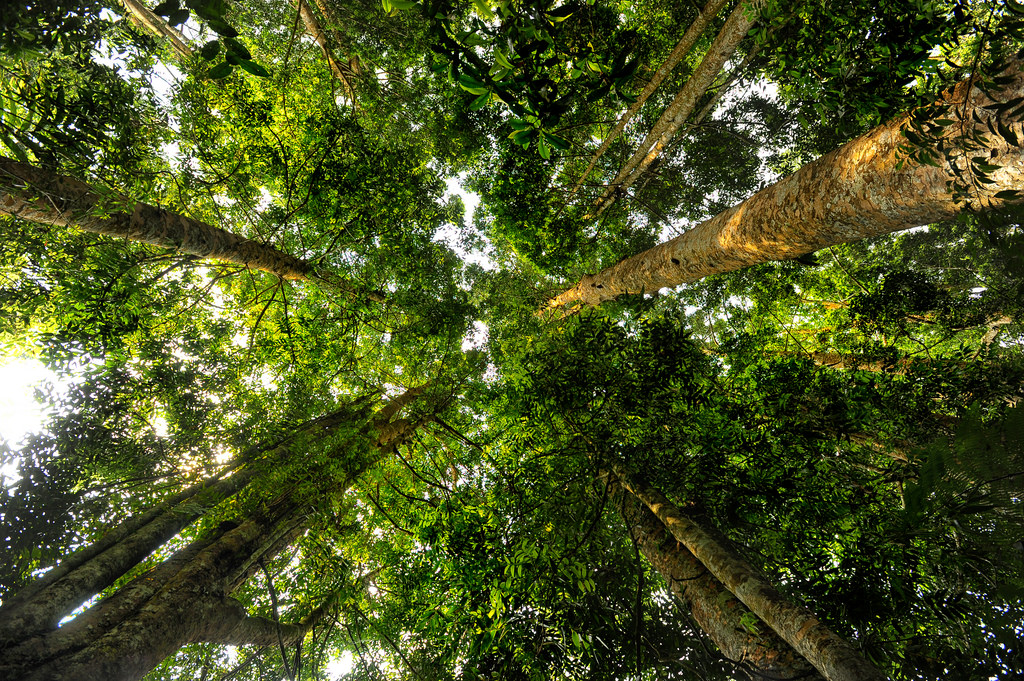 9 Maps that Explain the World’s Forests

By Crystal Davis and David Thau By the time we find out about deforestation, it’s usually too late to take action. Scientists have been studying forests for centuries, chronicling the vital importance of these ecosystems for human society. But most of us still lack timely and reliable information about where, when, and why forests are disappearing. This is about to change with the launch of Global Forest Watch, an  online forest monitoring system created by the World Resources Institute and more than 40 partners. Global Forest Watch uses cutting-edge technologies to map the world’s forests with satellite imagery, detect changes in tree cover in near-real-time, and make this information freely available to anyone with internet access. With Global Forest Watch, everyone from business executives to policymakers to indigenous groups can find out what’s happening in forests around the world—and use this information to take action. Now that we have the ability to peer into forests around the globe, a number of telling stories are beginning to emerge: 1. Global tree cover loss far exceeds tree cover gain 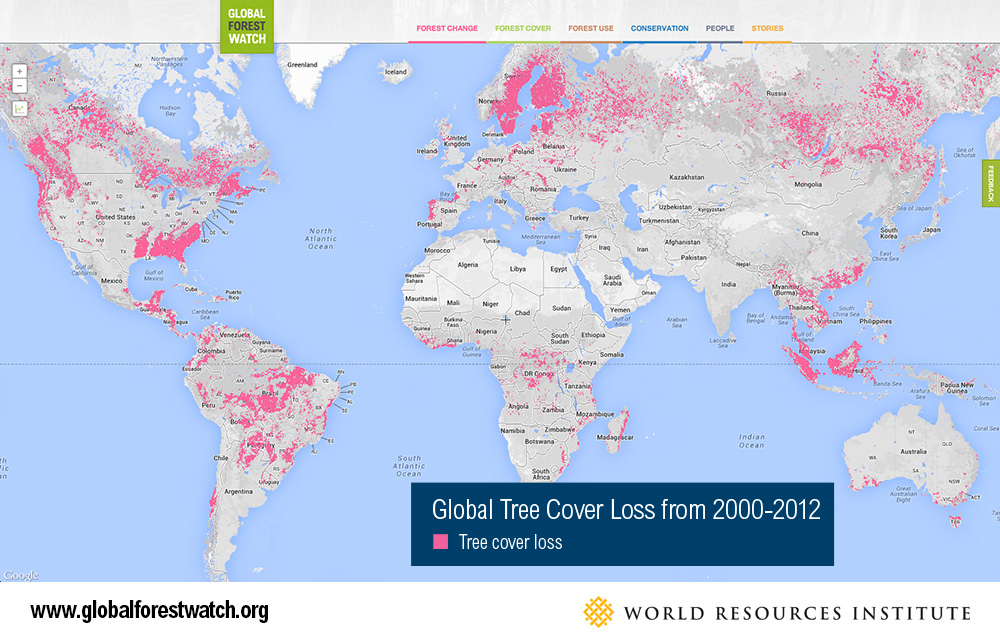 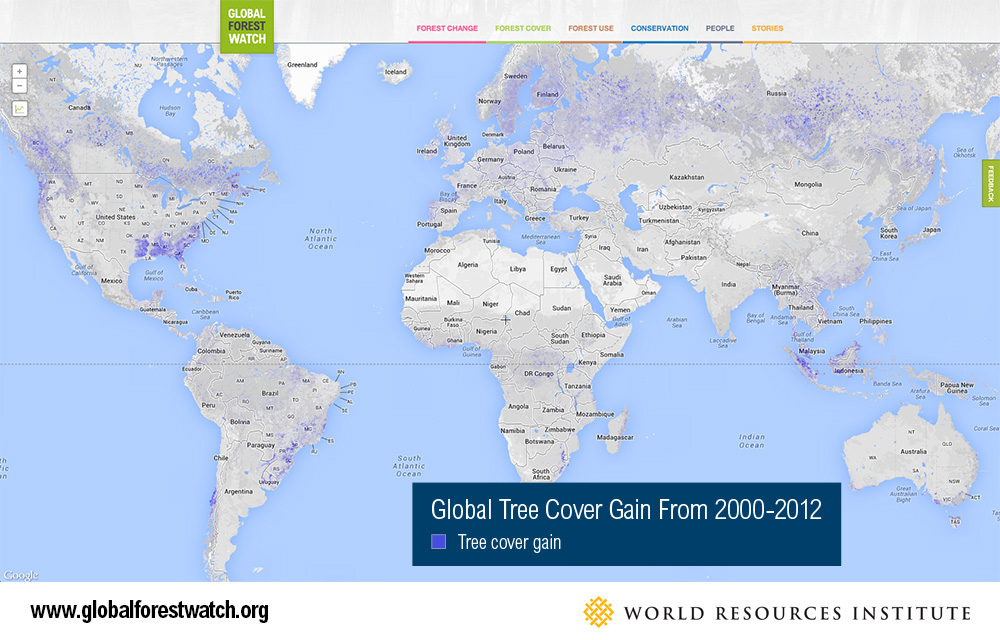 Data from the University of Maryland and Google shows that the world lost 2.3 million square kilometers of tree cover between 2000 and 2012—the equivalent of losing 50 soccer fields’ worth of forests every minute of every day for the past 13 years!  By contrast, only 0.8 million square kilometers have regrown, been planted, or restored during the same period. 2. Oil palm development is driving deforestation in Indonesia’s protected forests

The FORMA system—which produces monthly alerts that pinpoint 500-by-500 meter blocks where new tree cover loss is likely to have occurred—indicates massive deforestation in Indonesia’s Tesso Nilo National Park over the past seven years. Greenpeace, which relied on FORMA data to produce its License to Kill report, found that oil palm plantations are the culprit for much of the park’s destruction. 3. Biodiversity hotspots in the Congo Basin are under threat 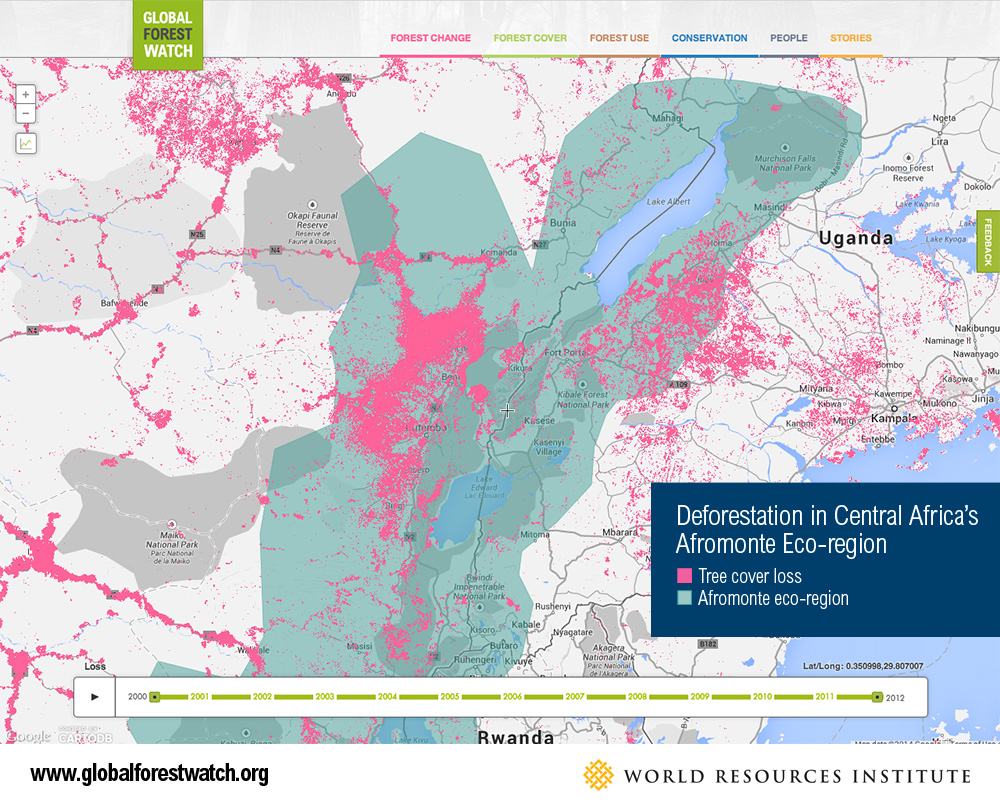 Forests are home to more than half of the world’s terrestrial biodiversity. Central Africa’s Eastern Afromonte eco-region—shown in teal—holds several populations of threatened and endangered animals, such as chimpanzees and gorillas. Significant tree cover loss appears to be occurring in this region, destroying important habitat for these species. 4. Deforestation rates are falling in the Brazilian Amazon

While Brazil still ranks as one of world’s largest deforesters, there’s positive news to report.  The rate of deforestation in the country has actually decreased by an average of 1,318 square kilometers per year over the past decade, despite a recent uptick in 2013. Brazil’s decreased deforestation rates are partly due to improved policies and law enforcement—supported by the country’s satellite-based, monthly deforestation alert systems. The map above compares deforestation from 2000-2006 with deforestation from 2006-2012 using data from the Deforestation Alert System (SAD) developed by Imazon, a Brazilian NGO and GFW partner. 5. Forests are protected in Brazil’s indigenous territories 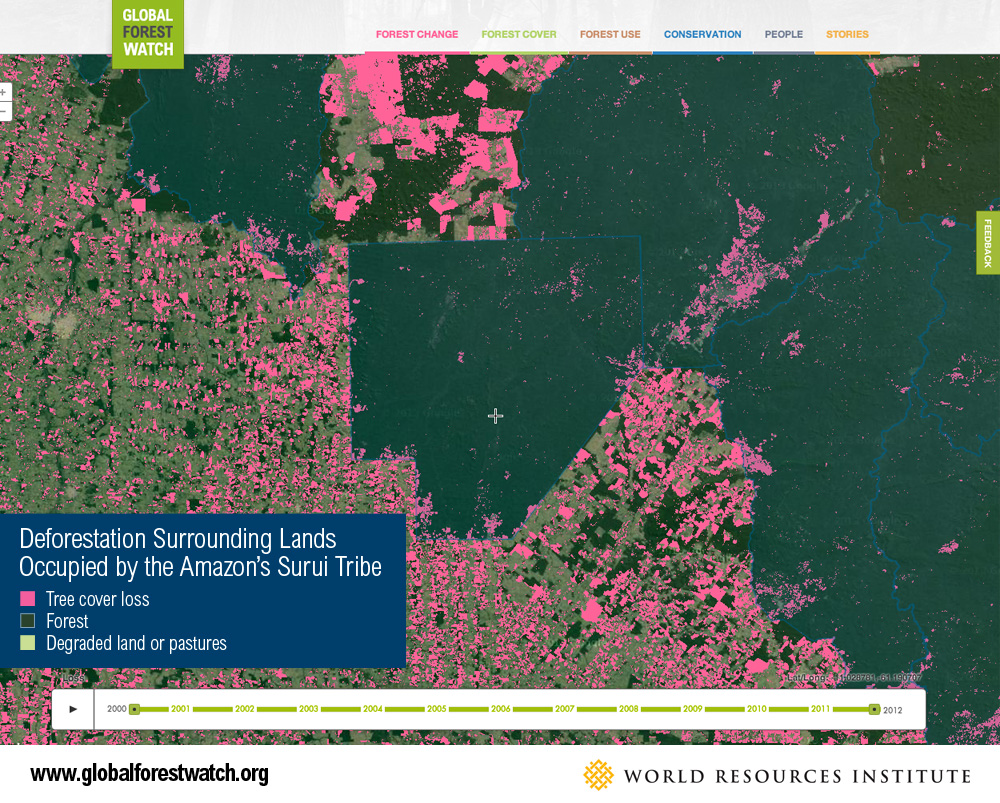 The traditional territory of Brazil’s Surui tribe is an island of green surrounded by lands that have been significantly degraded and deforested over the past 10 years. Indigenous communities often rely on forests for their livelihoods and cultural heritage, and therefore have a strong incentive to manage forests sustainably. However, many indigenous communities struggle to protect their lands against encroachment by illegal loggers. Global Forest Watch can help these communities call attention to this problem. 6. British Columbia’s intact forest landscapes are threatened 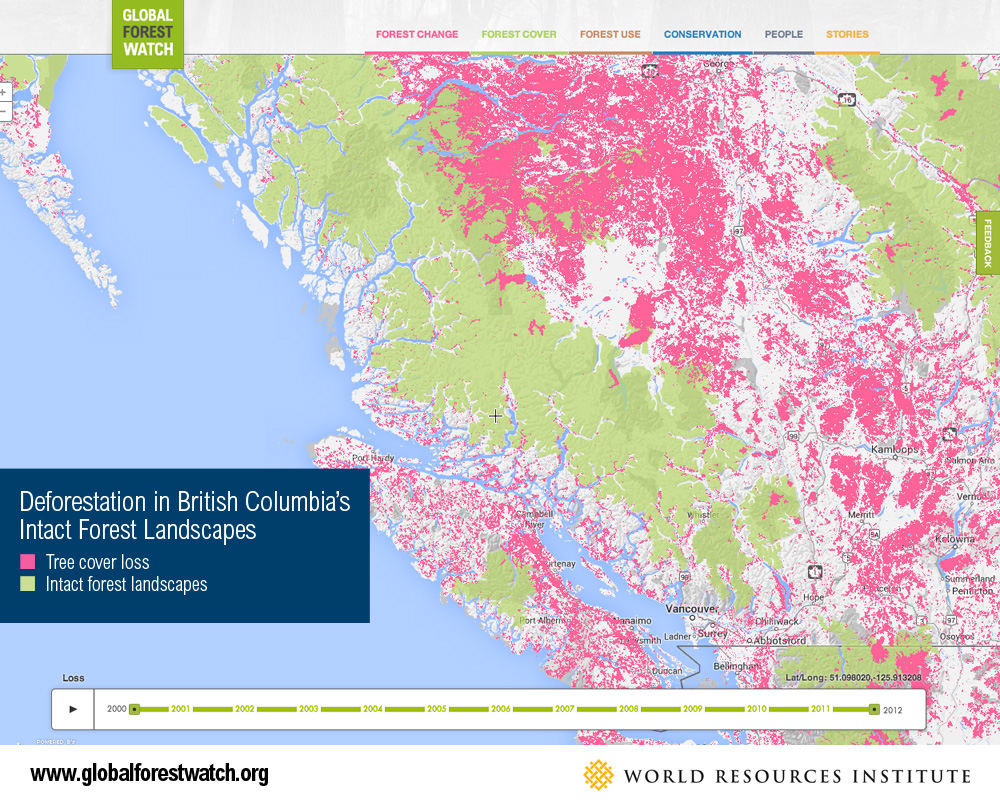 British Columbia’s Intact Forest Landscapes, depicted in light green, are increasingly threatened. Research shows that logging, fires, and disease are the greatest threats. This is a troubling trend. These forests—also known as “old-growth forests”—have a history of minimal human impact, so they’re particularly valuable for biodiversity, carbon storage, and provision of ecosystem services such as water and air filtration. British Columbia hosts a rich array of intact temperate rainforests, including the Great Bear Rainforest (seen above along the coastline). This forest is home to a rare subspecies of black bear that often display white coats and are considered sacred to the Native tribes of British Columbia. 7. Forests in the southern United States experience some of the highest rates of loss and regrowth in the world 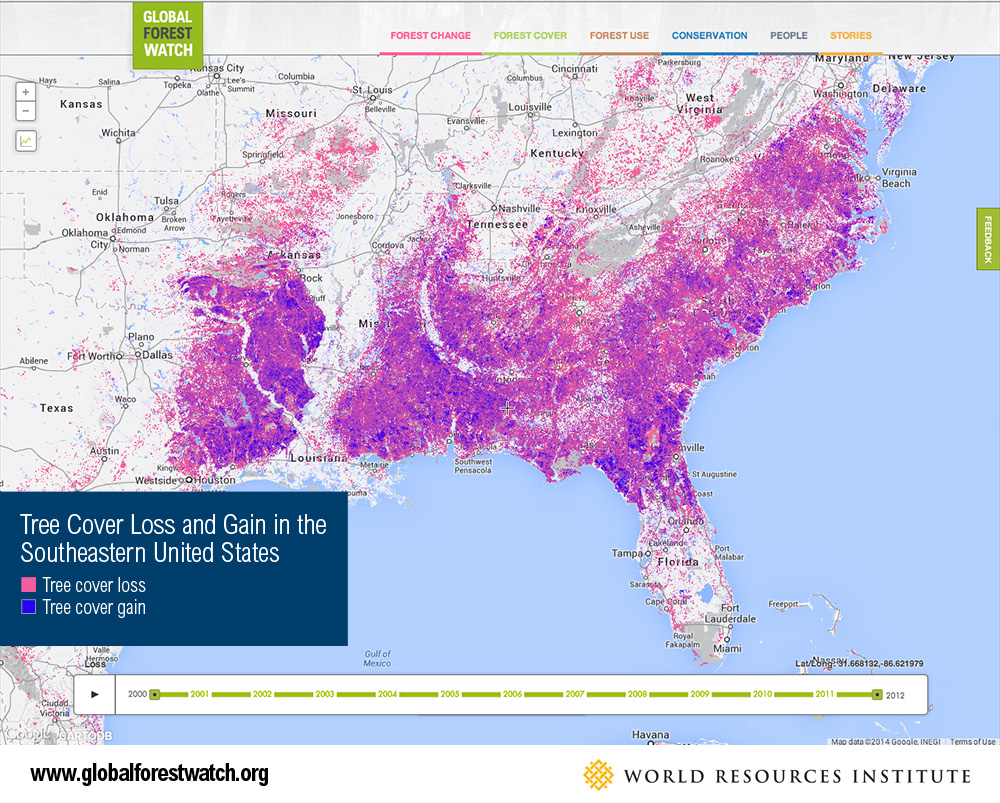 The Southern United States is home to the nation’s most heavily forested region, making up 29 percent of total U.S. forest land. The fine mosaic of tree cover loss (pink) and gain (blue) in the above map shows how forests throughout this region are used as crops, grown and harvested in five-year cycles to produce timber or wood pulp for paper production. In fact, between 2000 and 2012, nearly one-third of the tree cover in this region was either lost or regrown. This practice of “intensive forestry” or “production forests” is used all over the world to provide valuable commodities and bolster regional and national economies. WRI analysis suggests that if managers of production forests embrace a “multiple ecosystem services strategy,” they will be able to generate additional benefits such as biodiversity, carbon storage, and water filtration. 8. Forest and Peat Fires are a Chronic Problem in Sumatra’s Oil Palm Plantations 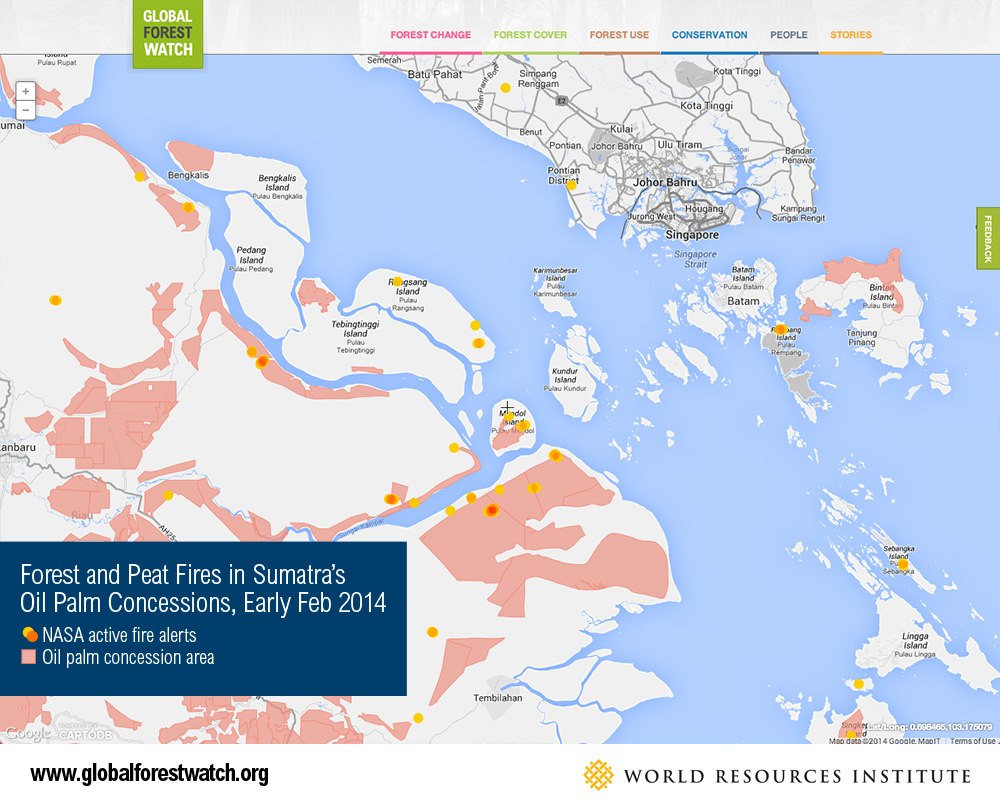 Forest and peat fires are a chronic problem throughout Indonesia. This snapshot from early February shows that many of these fires—which are detected by NASA’s near-real-time FIRMS fire data—are located on oil palm plantations. Last summer, fires in Sumatra sent plumes of toxic haze across Southeast Asia, causing significant damage to the regional economy and human health. WRI analysis overlaid hotspots from NASA’s FIRMS fire alerting system with concession data from the Indonesian government. We found that nearly 50 percent of all hotspots occurred in oil palm and wood pulp concessions, indicating that some of these fires may have been set to clear forest and peatland for agricultural development. 9.  Deforestation rates in South America’s Gran Chaco region exceed those in the Amazon 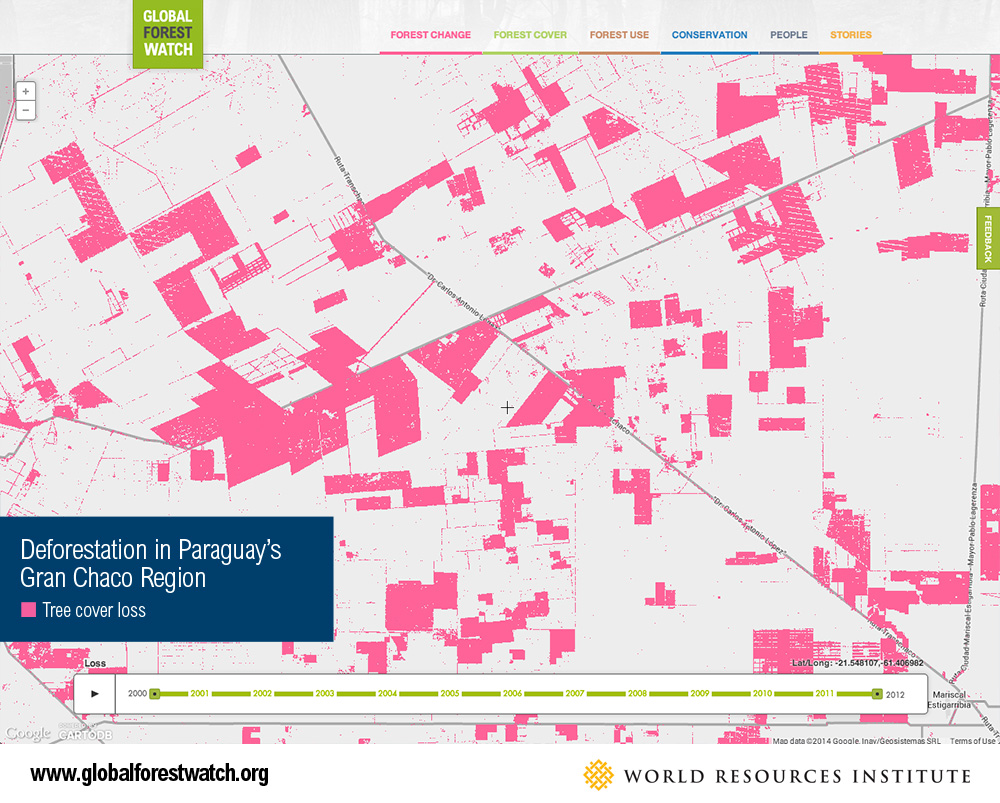 While many media reports focus on deforestation of rainforests in the Amazon, the dry tropical forests and savannahs of the Gran Chaco region—which spans across sections of Paraguay, Argentina, and southern Brazil—have some of the highest rates of tree cover loss in the world due to agricultural expansion for beef pastureland and soy fields. Zooming into the Chaco of western Paraguay, the rectangular patches of forest loss show a pattern consistent with the expansion of cattle ranching.

Make Your Own Forest Map

Previously, the data required to make these maps was difficult to obtain and interpret. Most people lacked the expertise, special software, and resources necessary to access, view, and analyze the data. GFW allows a host of users to readily access this information. For example:

So I encourage you to visit Global Forest Watch and make your own forest map. There are many stories to tell about what is happening to forests around the world—and those stories can lead to action that protects these special, threatened ecosystems. What story will you tell?

This post originally appeared on the WRI Insights blog. Dr. Dave Thau is the senior developer advocate for Google Earth Engine. EDITOR’S NOTE, 9/6/16: A previous version of this blog incorrectly attributed forest loss in the Paraguayan Chaco to beef and soy. The expansion of cattle ranching is the principal driver in the western, Chaco region of Paraguay, while the impacts of soybean production are restricted to the country’s eastern, non-Chaco region.