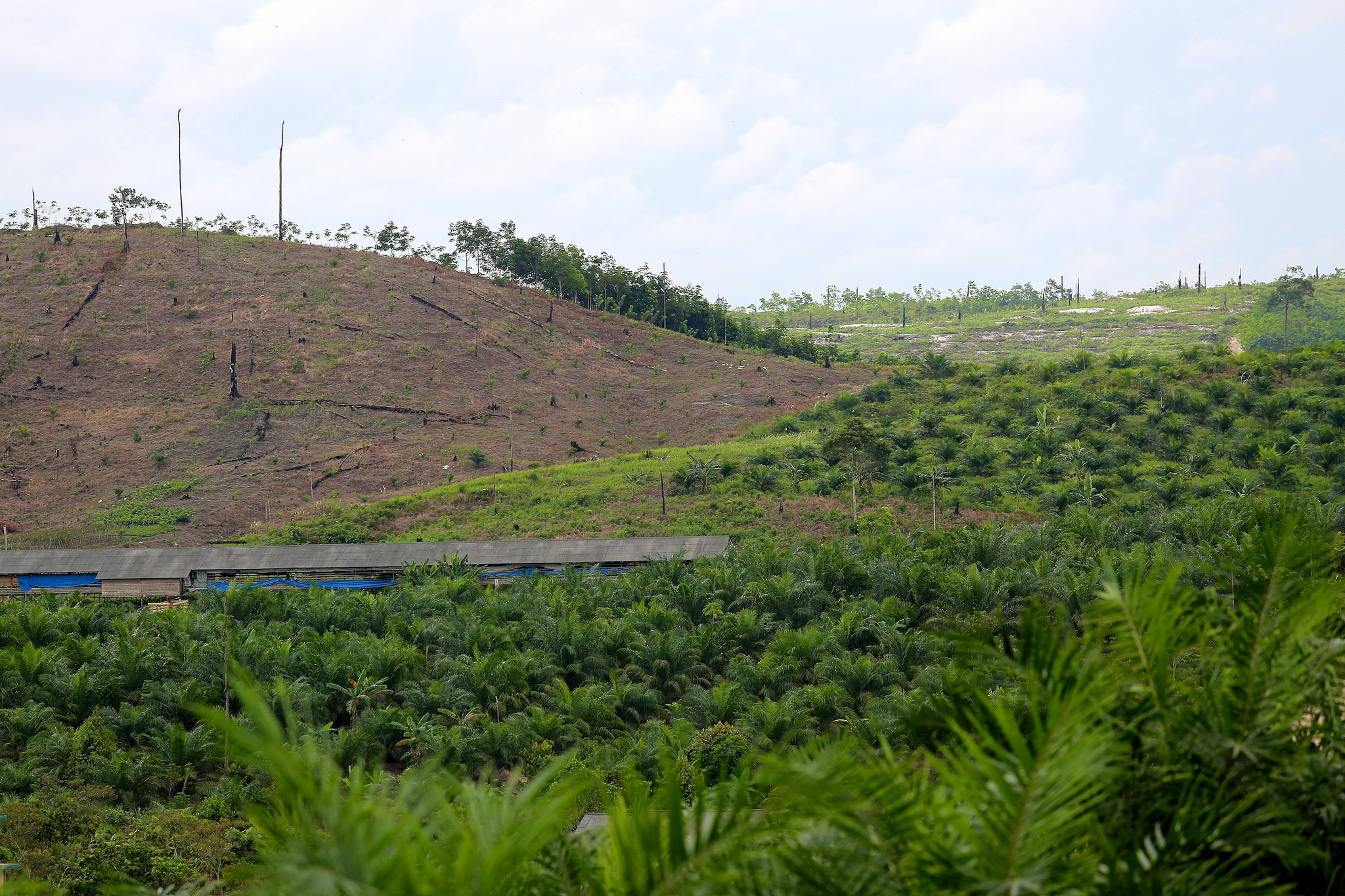 Having it All: Indonesia Can Produce Palm Oil, Protect Forests and Reap Profits

By Fred Stolle, Kemen Austin and Octavia Payne Indonesia has two big goals for 2020 that might seem contradictory: Reduce its greenhouse gas (GHG) emissions by at least 26 percent, and boost production of several major agricultural commodities, including doubling palm oil production. With agriculture being the single biggest driver of deforestation globally and in Indonesia, many are asking the question: How can the country pull this off? A new study from Duke University and WRI addresses this very question. It finds that in Indonesia’s largest palm oil producing region, it’s possible to fully protect the most valuable forests and reduce emissions by 35 percent while only modestly reducing profits.

Indonesia is the largest producer of palm oil in the world, with the island of Kalimantan housing roughly one-third of its oil palm plantations. Palm oil production on Kalimantan is estimated to have contributed 3-12 percent of national GHG emissions from 2000-2010, so interventions in the region could contribute substantially to national GHG reduction targets. 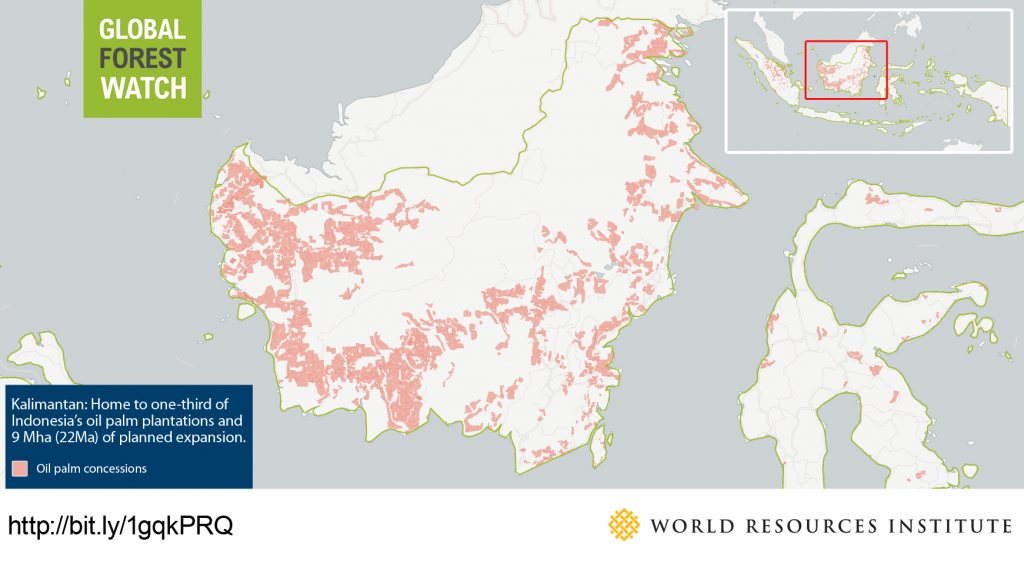 The study compared the emissions impacts of five policy options for oil palm plantation expansion on Kalimantan from 2010-2020 against a business-as-usual baseline. The study also estimated the cost-effectiveness of each option by measuring its associated impact on profits (see Table). The findings show that Kalimantan can achieve significant GHG reductions with only minimal to moderate reductions in profits, supporting the growing body of evidence that business and environmental interests can align. 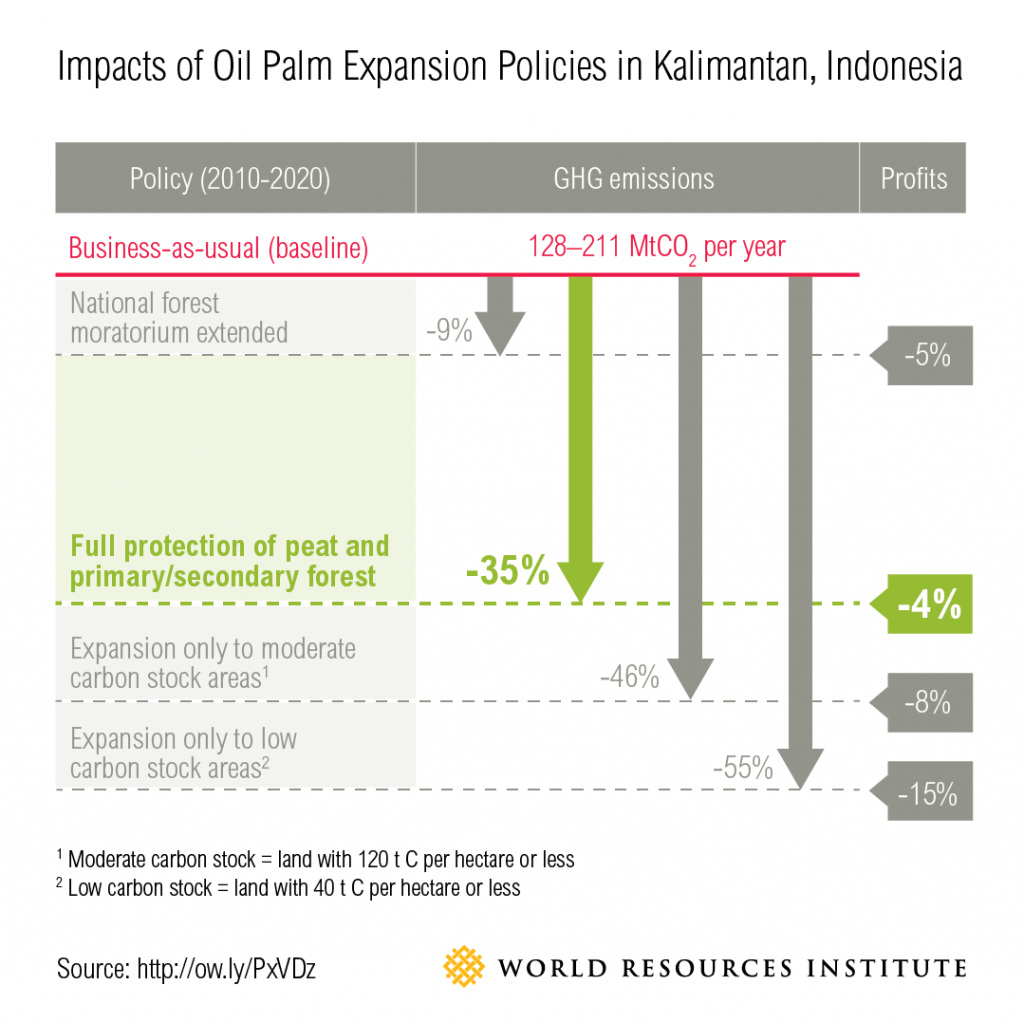 Estimates suggest that protecting all carbon-rich peat lands as well as primary and secondary forest from agricultural expansion—the “full protection of peat and primary/secondary forest” policy scenario—could be the most cost-effective action that government and industry can take. This approach could reduce GHG emissions by 35 percent, while reducing profitability by only 4 percent. It would also keep 18.1 million hectares (44.7 million acres) available for oil palm expansion—enough to accommodate the 9 million hectares’ (22 million acres) worth of existing permits and leave room for even further expansion.

How Can Kalimantan Deliver on a Win-Win Scenario?

The government of Indonesia is already moving in the right direction with therecent two-year extension of its moratorium to prevent new concessions on primary forests and peat lands. Previous analysis estimated that the moratorium reduced Indonesia’s emissions by 1-2.5 percent over four years, and would lead to greater emissions reductions the longer it is in place. Our study shows that extending the moratorium for a decade could achieve a 9-10 percent reduction in GHG emissions from the palm oil industry. Broadening the moratorium to also protect secondary forests—forest that has regenerated after a major disturbance such as logging, fire, or insect infestation—and forests inside existing concessions would meet the “full protection of peat and primary/secondary forest” policy described above. It would also more-than-triple potential GHG emissions reductions over the same decade, while affecting profits only minimally. At the same time, more than 50 multinational companies have pledged to eliminate deforestation from their supply chains. Following through on these commitments could help Indonesia achieve this scenario. The Indonesian government could support these zero-deforestation pledges by allowing companies to set aside existing licenses on forests or peat lands without fear of losing those licenses, or swap them for areas that are degraded and/or have low carbon stocks.

More and more evidence shows that environmental and economic benefits can be achieved together. In fact, land-use reform can actually strengthen the long-term vitality of the palm oil industry. In the case of Indonesia—and of Kalimantan specifically—protecting primary and secondary forests as well as all peat lands should be a top priority toward meeting the nation’s twin goals of emissions reductions and agricultural productivity.