Blog home/Climate/A Carbon-Neutral Land Sector by 2040? Here’s How to Get There
Search the GFW Blog 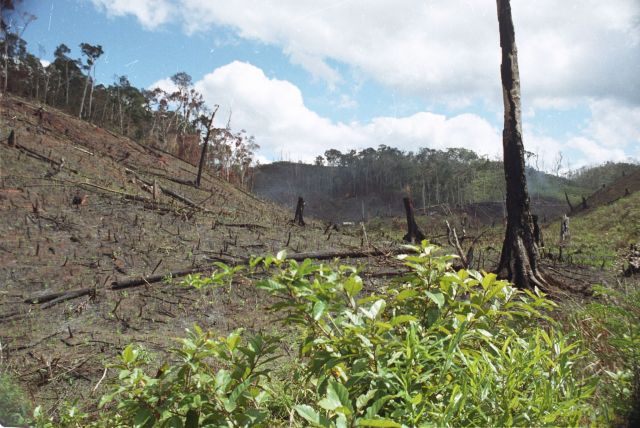 By
Nancy Harris and Stephanie Roe
Posted on October 29, 2019
Subscribe to the
GFW newsletter

A Carbon-Neutral Land Sector by 2040? Here’s How to Get There

By
Nancy Harris and Stephanie Roe
Posted on October 29, 2019
Subscribe to the
GFW newsletter

The 1.5 mark holds special resonance in the climate struggle. In the Paris Agreement, Parties agreed to try to limit warming to 1.5 degrees Celsius for the best chance at avoiding the worst impacts of climate change.

This August, a special report from the Intergovernmental Panel on Climate Change unveiled another 1.5 mark: temperatures over land have already risen by an average of 1.5 degrees Celsius, or 75% more than the global average (which factors in temperature changes over both land and ocean).

If we’re going to keep temperatures on land from rising further, how we manage our land globally – broadly, forests, wetlands and agricultural lands – matters a lot. Earlier this year, the World Resources Report: Creating a Sustainable Food Future laid out a menu of options that could meet growing demands for food in ways that help stabilize the climate, promote economic development, and reduce poverty.

Last week, a new study in Nature Climate Change added to this body of science by laying out eight action areas that, if fully implemented, could collectively make the world’s land carbon-neutral by 2040, a carbon sink by 2050, and contribute 30% of the total mitigation necessary to limit warming to 1.5 degrees. This is on top of the 30% of carbon emissions that land already sequesters naturally. Importantly, this can all be delivered in a way that contributes to many other Sustainable Development Goals like cleaner air and water, improved food security and public health, biodiversity and climate resilience.

The new study reconciles what is necessary with what is possible, offering not only a roadmap of timebound solutions to help stabilize atmospheric greenhouse gas concentrations over the next several decades, but also literal maps of where each action should be prioritized. Here’s where we can go from here.

Forests form the base

Forest-based actions give us over half the reductions the roadmap requires. The two largest wedges come from reducing emissions from deforestation and restoring forests, wetlands and drained peatlands. Maintaining and enhancing natural ecosystems is critical because they store more carbon than all existing fossil fuel reserves – not to mention they provide us clean air, water, and habitat for most of Earth’s biodiversity.

Right now, we’re headed the wrong way on deforestation, sidelining one of our best weapons against climate change. A recent report shows that rather than cutting deforestation in half by 2020 as envisioned in the New York Declaration on Forests, average emissions from tropical tree cover loss are 57% higher since 2014 than they were between 2001 and 2013.

Progress at the scale and pace necessary remain elusive for forest restoration, too. While the political will to restore degraded land has increased, efforts to implement restoration promises have been slow to gain traction.

The final tree-related wedge of the roadmap – improved forest management and agroforestry — shifts harvest and regeneration practices to enhance carbon stocks and integrates trees into croplands and pastures to provide ecosystem services and enhance farmer incomes. These actions require changes in management but no change to what the land is used for, and could remove approximately 40 gigatons of carbon by mid-century, or as much carbon dioxide as that emitted by the United States over the past six years.

Transforming food from farm to fork

Major changes to the global food system can significantly increase efficiency, make people healthier, and add up to make a big climate impact. Reducing emissions from agriculture is challenging because of the need to produce additional food for the growing global population, although a number of promising opportunities and new technologies exist. Agricultural actions in the roadmap are tailored for the predominant food produced in each region. Cutting methane emissions from rice production, for example, is a priority in Asia where more than 90% of the world’s rice is grown, while cutting methane emissions from livestock is a priority in countries with large herds. Improving manure and fertilizer management practices helps the global climate, and also cuts down on local water and air pollution. Agricultural soils can also be managed differently to enhance soil carbon sequestration , for example by using longer rooted cultivars and preventing soil erosion, although uncertainty remains in the science of soil carbon.

Changing food consumption patterns matters, too. Reducing food loss through improved handling and storage capacity is a priority for developing countries, while reducing food waste should be a focus for developed countries where improved date labeling, consumer nudges and campaigns, and supply chain technology can prevent good food from ending up in the waste bin. Cutting total global food loss and waste in half by 2050 could cut emissions equal to about four years’ worth of U.S. emissions.

Finally, if half of the global population also shifted towards a more plant-rich diet , constraining meat consumption to 57 grams per day would lead to emissions cuts equal to another four years of U.S. emissions.

Importantly, these food and forest wedges rely on each other to succeed: changes to food production and consumption are essential to reduce global demand for agricultural land even as the population grows toward 10 billion, allowing the world to reduce deforestation and open up land for reforestation. And conversely, strong forest protection measures will be necessary to reap the benefits of reduced agricultural pressure.

Bioenergy with carbon capture and storage (BECCS) is deployed only sparingly, on degraded lands and using waste and residues. Most climate models rely heavily on BECCS because achieving the 1.5 degree target is generally considered to be infeasible without substantial carbon removals. But it is the last wedge in the roadmap for a reason: The feasibility and sustainability of large-scale BECCS as a climate solution is not proven. Indeed, WRI has elsewhere found that dedicating land specifically for the production of bioenergy—rather than using biomass wastes and residues for energy—is not a good strategy for the climate. Instead, this study’s roadmap relies on deeper emissions reductions from consumption changes such as a shift toward plant-rich diets, which also have health benefits, and on more removals from ecosystem-based sequestration, which enhance vital ecosystem services. Our natural systems can and already do sequester large amounts of carbon, but they will need to be complemented by other sustainable technologies by mid-century.

Every country has land, so every country can play a part in land-based mitigation. It’s also true that every country uses land differently. But if these wedges show anything, it’s that the world will need many kinds of contributions, from forests to food and beyond, to flip the land sector—the anthropogenic emissions and removals related to agriculture and land-use, land-use change and forestry—from a carbon source to a carbon sink.

Finally, the land sector can’t do it alone. Aggressive reductions in fossil fuel emissions and the energy sector (~50% reduction per decade) are a fundamental component of any plan to keep global temperatures in check. This roadmap is just one important piece of a larger journey.